How not to communicate when things go wrong

Living on the L train route in Brooklyn has made me no stranger to rush-hour delays and cancellations. This morning, my ire was even captured on camera and featured on gothamist.com. (That’s me in the bottom-left corner, plotting my escape.) 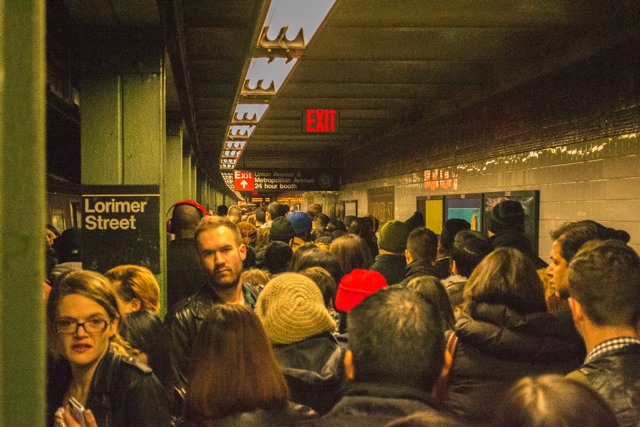 That picture was taken shortly after a train had vomited hundreds of passengers onto our platform before being taken out of service. But for me, the (very sour) cherry on top was when, moments later, an automated message rang out over the station speakers:

‘Thank you for travelling with MTA.’

Needless to say, it didn’t lighten the mood.

A transport #fail might seem trivial compared to some of the genuine disasters that many companies face. But MTA’s handling of the situation shares many characteristics of crisis communications gone wrong.

Here are four lessons inspired by this morning’s drama.

1. The wrong message at the wrong time will only make people angrier

Two thoughts went through my mind when that robot lady’s voice came over the speaker:

1) Yeah, right. Thanks to MTA, I’m not travelling anywhere.

2) Why the hell are they thanking me when they should be apologising? That last point is crucial. Even if it’s not your fault, acknowledge that people aren’t happy, and say you’re sorry.

2. If you don’t give the whole story, people will make up their own

3. When you do explain yourself, use language that people can understand

What the hell is a ‘rail condition’? Is it terminal? Or is it more like morning sickness, seeing as we’ve had two rush-hour ‘rail conditions’ in a row?

Basically, all I want to know is: Will I get to work tomorrow? I guess we’ll find out in the morning, because MTA isn’t telling.

What’s the hidden link between mental health and language?

92% of companies know they need to be doing more to support their people’s mental health. One way to do that is to pay attention to your words in the workplace. And to use language – writing in particular – to boost wellbeing while you’re at it. Here’s how…