Wenlock and Mandeville: what great – if strangely gloomy – names…

So, the weird blank-faced Olympic mascots, Wenlock and Mandeville, are ‘in shops this week’.

Sporting mascots tend not to fare well – they always seem just a bit forced and twee and too obviously about flogging merchandising. And this pair have more than a whiff of that about them: what, exactly, do these two alien Tellytubbies have to do with sport? But I have to say: their names are great. 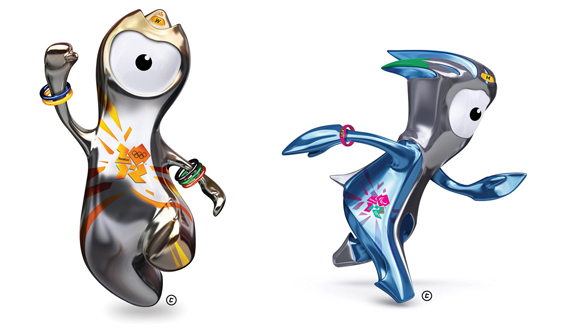 Say them out loud. Roll them around your mouth. They sound like they’re a pair of melancholy detectives from a minor existential comedy. Or perhaps Wallace and Gromit’s posher cousins. Or the names of two slightly bland English cheeses.

They make me think of the Shropshire town of Much Wenlock, and Stoke Mandeville hospital. Both places that reek of Englishness. Sporting names are usually so thrusting and energetic and relentlessly positive. Wenlock and Mandeville just seem so... gentle.

I did a little light googling. It turns out, of course, that these names haven’t been plucked out of the air just because they sounded nice – but because of their Olympic ‘resonances’. Much Wenlock was the home of Dr William Perry Brookes, who set up the Wenlock Olympian Games in 1850, and was the ‘inspiration for the modern Olympic movement’. And Stoke Mandeville stadium was the birthplace of the Paralympic Games. It all makes sense now.

In a way it’s a shame the names turn out to be so specifically Olympic-related. Even so, they’re corkers.

It’s not just another event on the content calendar. It’s a chance to show readers that your brand is socially conscious and authentic. Here's how.